Posted on March 6, 2013 by Dave
The Members of BulkHomeBuyers (“BHB”) are happy you have decided to find our Website. If you are returning, welcome back! We appreciate you being here. We want to continue to provide information about the ongoing real estate market and our investment opportunity. So again, thank you for your interest and keep checking back.

The greatest investment opportunity is happening right now and will only last for a short period of time. While the banking system has questionably caused the greatest financial crisis ever in the history of our country, it has also created the greatest investing opportunity we will likely ever see in our lifetime. This is a rare opportunity to buy bank real estate owned assets (“REO Assets”) for pennies on the dollar and offset the recent financial losses everyone has experienced. The one way everyday investors can recover from recent losses, build incredible wealth in the midst of this crisis, and stabilize their estates with hard assets, is to buy the same homes the banks are taking back and selling at deep discounts.

Many people have become a part of our investment system. We work with many funding options such as; private placement funds, corporate funding, trust funds, self-directed IRA’s and 401K’s, IRA trust custodian accounts, private and commercial leveraging, and IRA leveraging. We hope you join us on this journey to be a part of the greatest investment opportunity in our lifetime. Please contact us through your representative, consultant, affiliate, or referring party. Otherwise just go to our Contact page above and fill in the simple form. We look forward to speaking with you soon.

Letter to Fannie and Freddie regulator: Not in our backyard

Nineteen members of California’s congressional delegation object to Fannie Mae and Freddie Mac selling foreclosed properties in their state to investors in bulk for conversion to rentals.

Fannie and Freddie’s federal regulator, the Federal Housing Finance Authority (FHFA), has said it will approve bulk sales only in markets where there’s a glut of properties on the market.

“In California, there is no question that disposing properties through bulk sales will yield a lower return for (Fannie and Freddie) and taxpayers than through traditional disposition methods,” California lawmakers said last week in a letter to Edward DeMarco, FHFA’s acting director.

The California Association of Realtors welcomed the letter, saying lawmakers “clearly understand that this program may be a viable solution in states where there is a large inventory of unsold foreclosures. However, carrying out this plan in California would potentially further delay a housing recovery and, ultimately, result in greater losses for the taxpayer.”

Investors buying homes by the dozen 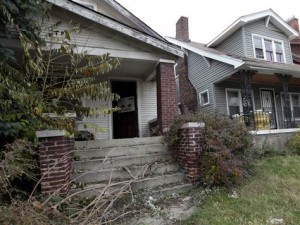 When Vena Jones-Cox entered the foyer of the once-grand Colonial-style home in downtown Columbus, Ohio, she stepped onto a wood floor that was so moldy and mushy that it actually wiggled. As Cox proceeded down the basement stairs, they disappeared from underneath her.

The house tour from hell didn’t stop her from making an offer on the place. While she was at it, she bid on some other houses, too. Forty nine houses, actually.

As the greatest real-estate fire sale in the history of the United States rages on, the bulk buy is the dead hot deal of the moment. In some of the most foreclosure-ravaged parts of the country, it is almost as if the housing market has become the new big box store, with investors wiping out whole shelves at a time.

The idea is to arbitrage other people’s misery. With the ranks of the rental class expected to swell, investors can buy houses at clearance sale prices, pour some money into repairs and then take advantage of the difference between their low cost of capital and the rent they receive. Often, they bank cash from day one.